The seasons are rapidly changing on the Jurassic Coast. This has always been a favourite time of year for me, and as an artist, it’s always a great time to photograph and sketch outdoors. The new growth gives the landscape vibrant colours and a fresh look that’s difficult to find at any other time of year.

I’m spending a large amount of time exploring the Triassic section of the World Heritage Site and even though I know this stretch well, and live here, I still manage to find places that leave me speechless. Sometimes I have to remind myself that I’m at work when I’m walking and photographing the coast. I’m very lucky to have a job that takes me to some of the most beautiful locations on the coastline. 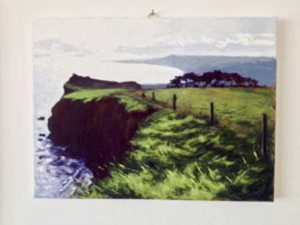 I’ve recently arranged walks with Jurassic Coast Ambassador John Ayres and Dr Roger Trend from Sidmouth museum. Each walk was full of enthusiasm about the geology of Sidmouth and Budleigh Salterton. Roger and John each talked about how long it’s taken the coastline to be formed and the timescales were enormous, something that I found hard to comprehend. The Jurassic Coast is not only vast in scale but it’s also enormous in terms of time. I’m starting to realise this is quite an epic coastline!

Scale is something that keeps cropping up in my notes when working on the project. The 180 million years of geology on this coastline is astonishing and also, the vastness of its landscapes. As an artist it’s important to get this vast scale across in the artwork and it’s difficult to achieve without painting on a very grand scale. The largest painting in this first exhibition is 15 foot by 5 foot, the biggest I’ve ever worked on. The paintings are so big that I have to tape my paintbrush to a long garden cane, as that’s the only way I can stand far enough back to see the entire painting as I’m working!

Painting on this scale is something that I’ve always found difficult, but it’s possibly the most rewarding of any studio work. Not only do I have the practical problems of using vast amounts of paint and difficult drying times, but the paintings are so big it feels that I can barely control them. After all, they are much bigger than me! You need to treat artwork on this scale with increased respect, because if you make a mistake it’s going to be a very big one.

In other news, I attended the Jurassic Coast Trust’s boat cruise with City Cruises Poole in May, capturing some fabulous images of Old Harry Rocks and the surrounding cretaceous geology, which I hope to expand upon in the studio when the time is right. I also recreated Mary Anning’s famous plesiosaur fossil in macaroni with young guests at Ladram Bay Holiday Park over half-term. The kids were so enthusiastic and I was quite pleased with the final product.

Back at the studio, it’s getting very busy and almost full to capacity, and it is the major paintings for the Kennaway House exhibition in October that I’ve dedicated most of my time to. I’ve even made a little cardboard model of the venue so I know which painting will go where. I’m starting to understand the Jurassic Coast more each week, and it’s not only the geology that’s influencing the artwork but the people I meet whilst out working. As this project continues I’m starting to feel deeply rooted in this epic World Heritage Site.