Pilgrimage - A Portrait of HCPT

I’ve always thought of myself as very lucky doing something that inspires me. Walking into my studio every day still fills me with joy and excitement. I am so fortunate that my life revolves around my job as an artist.

For one week a year that all changes. Each Easter I close my studio down, regardless of deadlines or work pressures, for my other passion in life – HCPT. 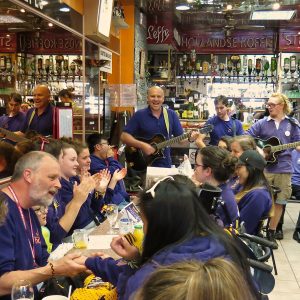 HCPT takes disabled and disadvantaged children to Lourdes in the south of France at Easter. The benefits the stay has on the children we take in our group (HCPT Group 141, based in Devon) is always staggering – be it in terms of their independence, self-esteem or simply little, but important, achievements that they attain during the week. It also, in many cases, provides much needed respite for the parents and carers back home.

Put simply, the week gives people hope. My saddest and happiest experiences have been in Lourdes. It’s a place where I feel deeply connected to the most basic human emotions of love, hope, fear, joy and faith. It is a place of extremes. I’ve never experienced anywhere else you can witness incredible joys and deep sorrows in such a short space of time. It really is a remarkable place.

I’ve always wanted to do something that combines my day job as an artist and my week in Lourdes. However, as the pilgrimage is so deeply important to me, I’ve kept them separate until I could find a truly meaningful way of bringing them together. I’ve never taken on a project that is so deeply personal before, and it won’t be an easy journey. However, I’m sure my passion for HCPT’s work will shine through to create something truly special.

With the project I’ll explore the work of HCPT through a collection of portraits. Some will be large group portraits full of life, laughter and noise – while others will be quiet, intimate and delicate. I want each painting to capture an easily missed moment of care and deep love that are seen in Lourdes. I hope the collection of paintings will eventually give a true and vibrant flavour of an HCPT pilgrimage – be it at Easter or Summer.” 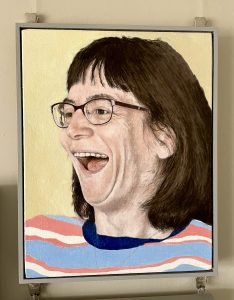 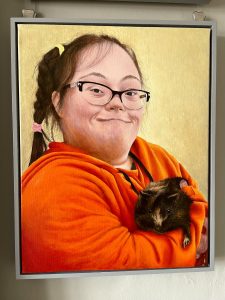 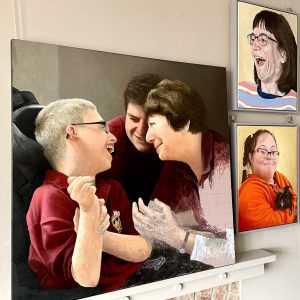 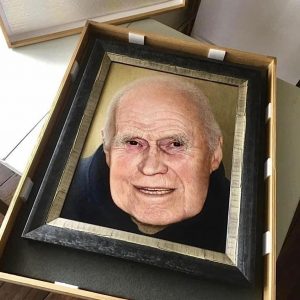 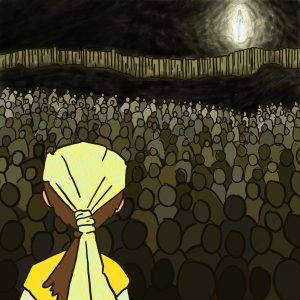 Last September, the charity HCPT asked if I could do another illustration project with them. HCPT is a charity that means a lot to me, so I jumped at the chance of supporting them again. My last illustration project was the Story of Bernadette that we launched online during the pandemic. I had so much great feedback and many people said how much it meant to them at a time where they couldn’t travel to Lourdes.

The latest project was to illustrate all 18 of the Lourdes apparitions – a difficult task to do.

HCPT provided me with a script of the text that would be spoken over the animations, and I made a start. I worked on each of the 18 animations in numerical order and started by designing a rough layout. Some of them were very challenging and some were much more simple. I tried to think what the atmosphere would have been like in Lourdes all that time ago – the wonder, the mystery, the confusion, the fear, the gossip, and the growing spectacle of the crowds – it must have been an incredible place during that time.

Over the 3 weeks I worked on this project, I got to know the story of Lourdes a little more, and I feel I’m better connected to the place I visit each Easter with the HCPT group I volunteer with.

I treated each of the 18 apparition animations as a piece of art – each to be viewed in isolation, and each has a message. I wanted the viewer to feel the excitement of the scene, the fear, the isolation, the enormous crowds, the frustration, the faith, and the bravery.

In its really basic form – it’s a story of a small girl doing something extraordinary – something brave and showing incredible commitment, faith, love and courage. It’s a story well worth sharing. 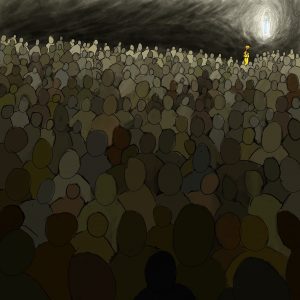 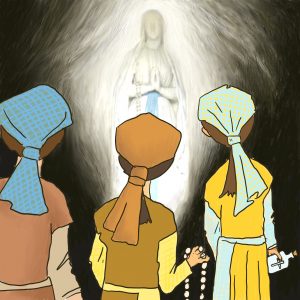 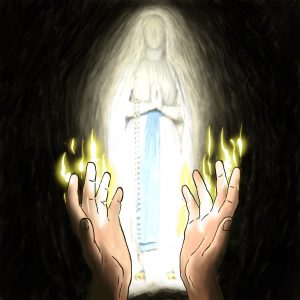